Around this time last year, Bryan and I started the transition from living in Europe for two years to coming back to the United States. Packing up our first “married-life” apartment and beginning the journey to Atlanta was quite the emotional process. 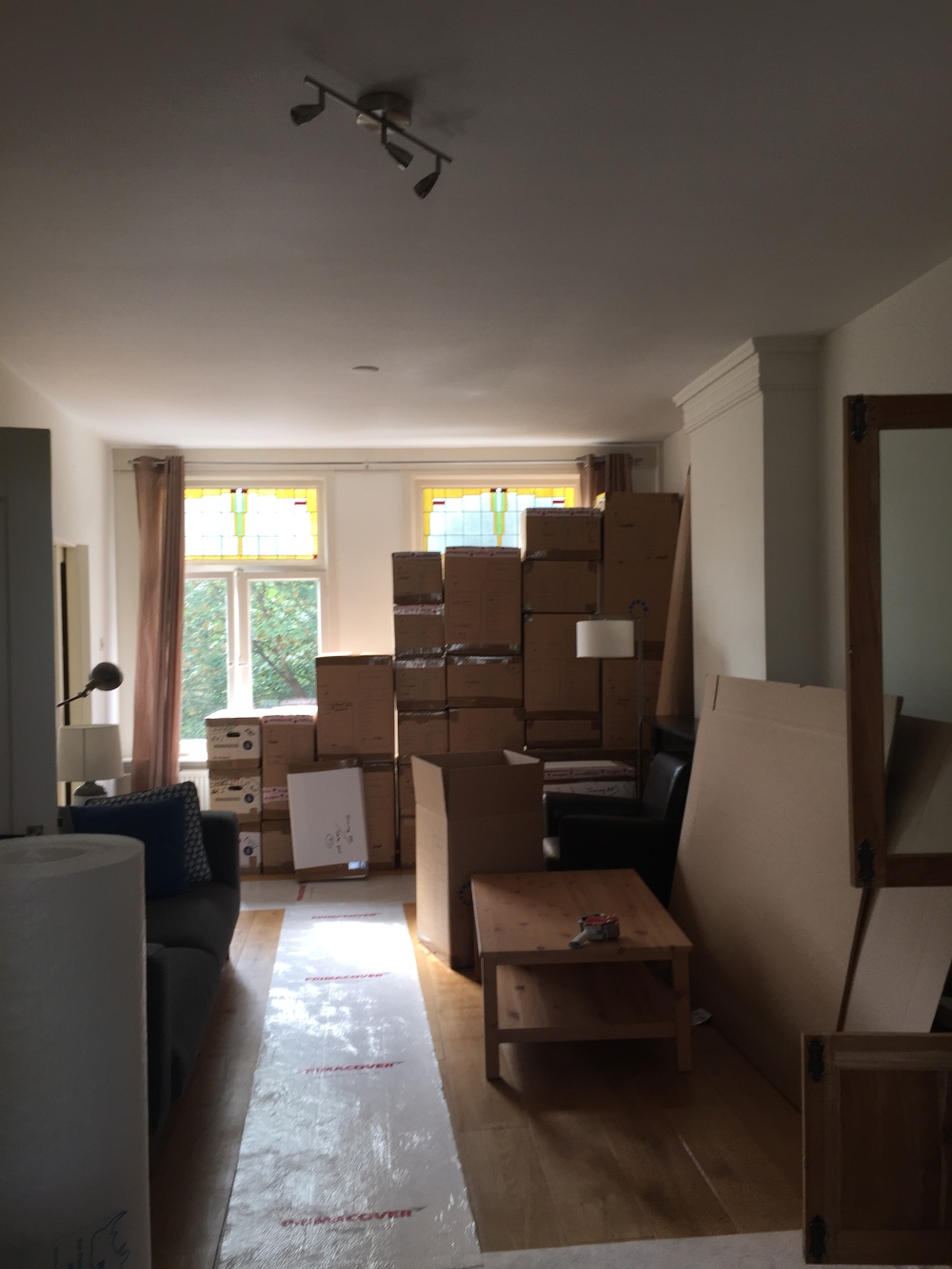 Thankfully, we had all the travel in between to enjoy.

So, we packed up all of our stuff (except for some clothes!) and sent the rest of our items home with packers.

We met my family in Copenhagen to begin our month of traveling the next day. The first part of our traveling was a Dahl family cruise to the Nordic countries.

There was a ton of anticipation surrounding this special cruise because we originally planned to do it in June of 2017. When Melissa was diagnosed with cancer in May of 2017, we pushed it back a year. I am so glad we did because the cruise was truly meant to be enjoyed in August. We had the time of our lives!

p.s. writing about this trip a year later will be more difficult as some of the small details are probably fuzzy, but it is still important to capture the memories we made together.

The cruise started on Tuesday the 28th of August. We met the rest of the family at the hotel in Copenhagen. The first evening we went to a cozy dinner at a restaurant called Olive Restaurant.

The next morning, we booked a “flytographer” to take pictures of us around the city and then we went on a biking tour of Copenhagen with Nova Fairy bike tours in the afternoon. 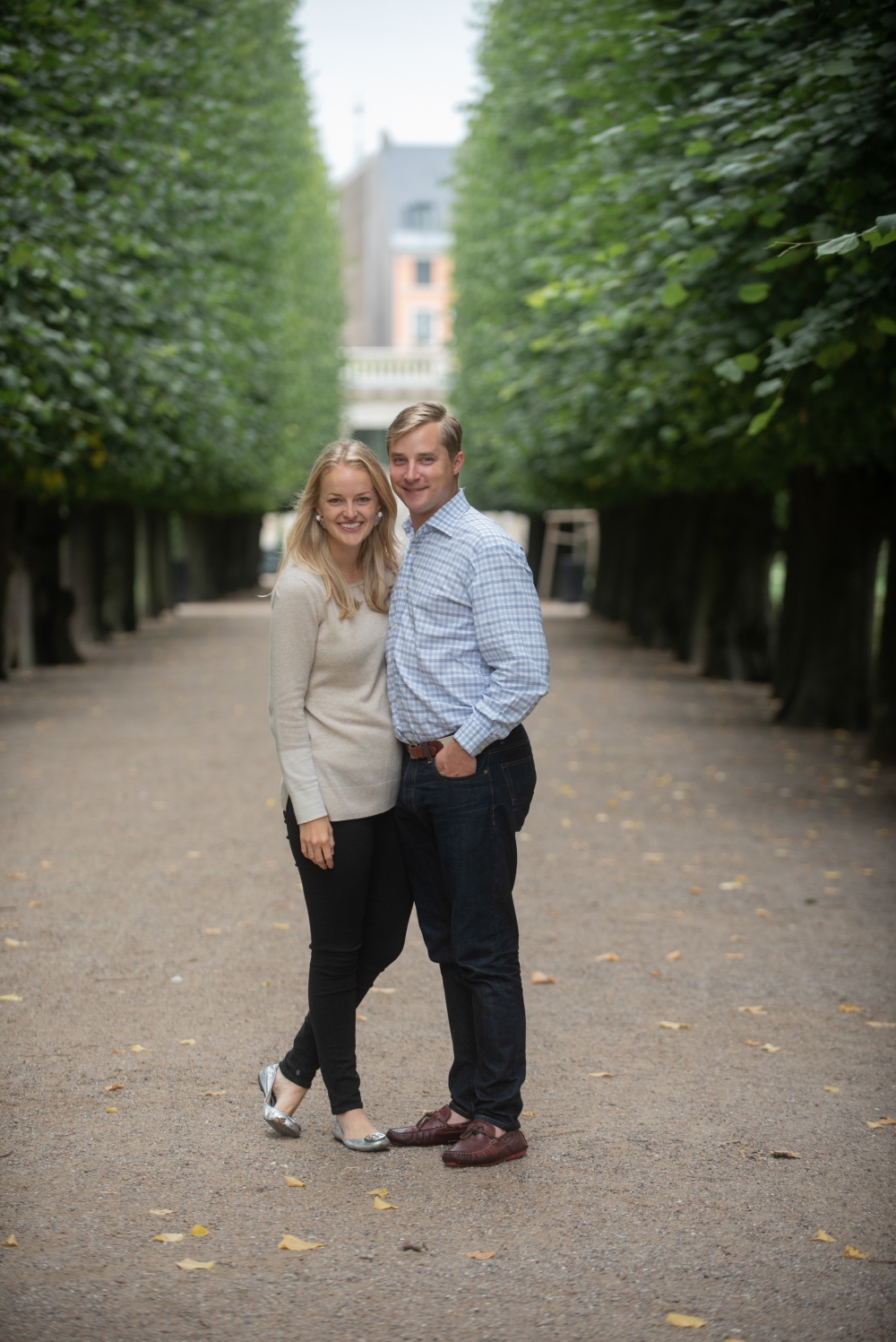 It was neat for Bryan and me to experience another bike-centric city besides Amsterdam! Copenhagen is one gorgeous city. 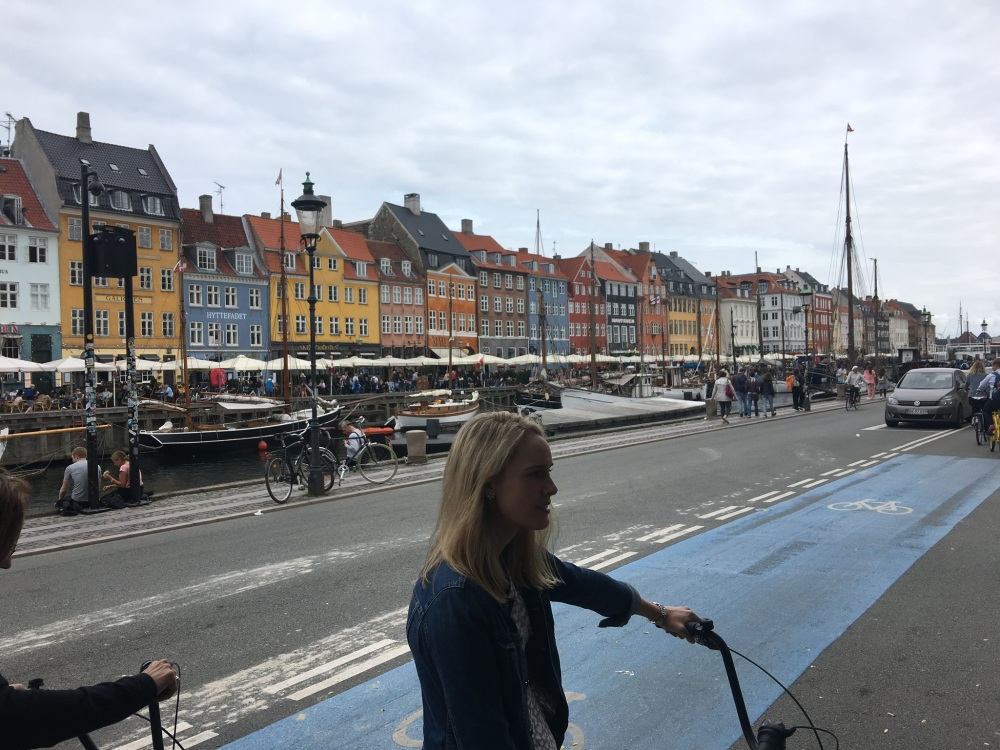 After our day of exploring, we boarded the ship and settled into our rooms. We ate at the Italian restaurant on the boat that evening!

The next day, our boat docked into a little town in the Northern part of Germany, called Wernemunde. The cruise line encouraged passengers to arrange transportation into Berlin, which most families did. The drive was not the most scenic, but Berlin was absolutely worth it!

When we arrived, we met our tour guide, Yuri, and he gave us a wonderful and (funny!) high-level overview of the city. It was “information overload” because there was so much to do and see in such a short amount of time. We did part of the day walking and part of it in the van.

There were a ton of important parts of the Berlin day, but one of the most impactful moments was seeing the Holocaust Memorial in the center of the city.

We  paid respect to the Berlin Jewish population that was killed during the Holocaust with a moment of silence. Yuri shared with us about his fears of the growing alt-right movement in Berlin right now which is concerning him with their anti-semitic rhetoric.

We also ate a DELICIOUS Israeli healthy lunch with Yuri. He said it was a welcome surprise for him. Most of his tours want a typical German – style lunch, but we were ok to skip that part!

Another highlight of the day was visiting the Berlin wall. The Berlin Wall was constructed in 1961 to separate West Berlin and East Berlin during the Cold War, and actually came down on the day Melissa was born, on November 9th, 1989. We visited two different sections: The West Berlin side with artwork and the East Berlin side. 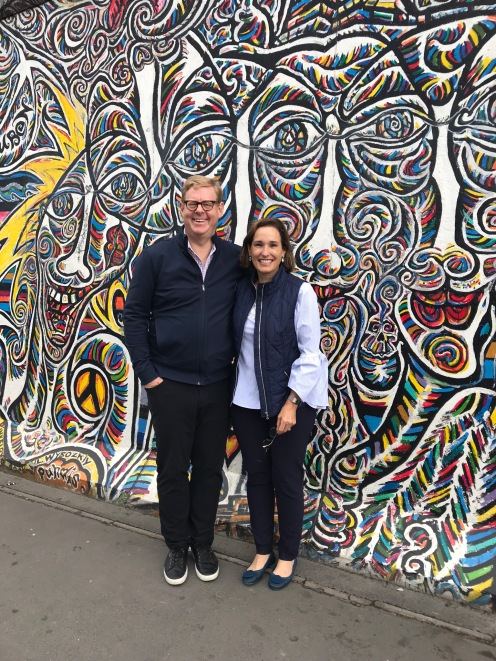 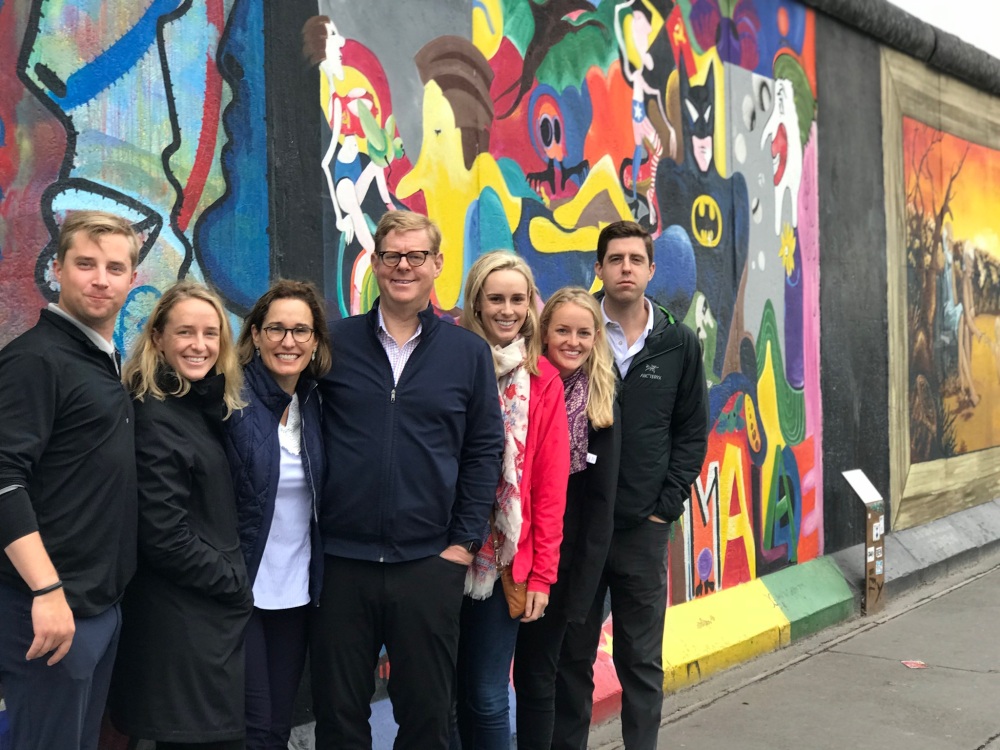 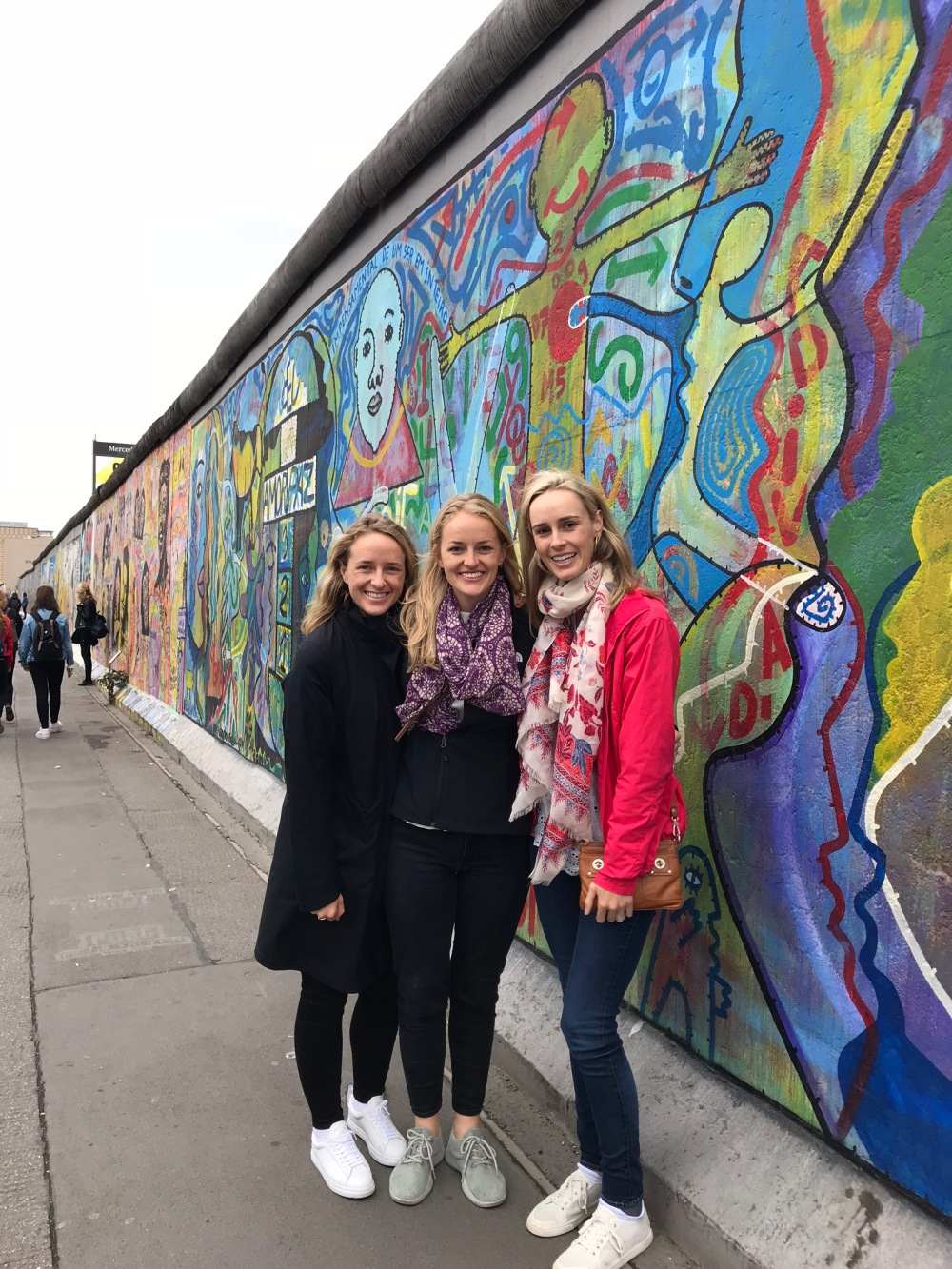 We could have spent another day touring Berlin so I hope to go back soon.

On Saturday, September 1st, we arrived in Tallin, Estonia. Tallin, with it’s perfectly preserved 13th century Gothic style architecture, is especially beautiful. We visited the cobblestoned Old Town, which had a ton of little shops and the Kiek in de Kök, a 15th-century defensive tower. 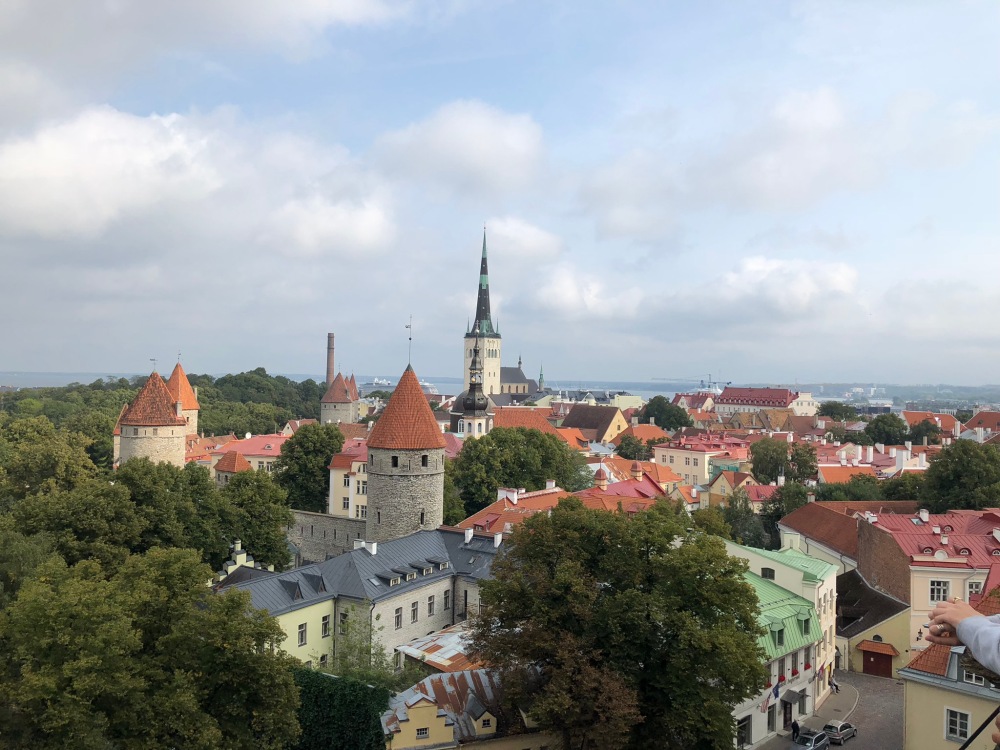 Bryan and I bought a small painting in a local art gallery of the town center of Tallin, which we will always treasure!

That evening, we did the special chefs pairing wine dinner at La Riserve on the ship. We loved being able to share a private dinner and the food was delicious! My dad asked them to pour all white wines with his courses and the waiters happily agreed!

All for now! The rest of the trip will come in a part 2..