This blog post is the hardest to start. How do I begin to describe the impact this trip had on my life?

Our group (Bill & Melissa; Jacqueline & Alex; Bryan and I!) arrived in Tel Aviv at the crack of dawn on Thursday morning, and caught a few zzzs  before starting our day. We were a bit disoriented from traveling through the night, but woke up early nonetheless.

Our airbnb was located right in Jafa (old town) and functioned as a fantastic base to walk around and explore.

We got coffee and ate breakfast at the cutest spot in Jafa called Basma and enjoyed a lovely meal soaking up the warm weather. 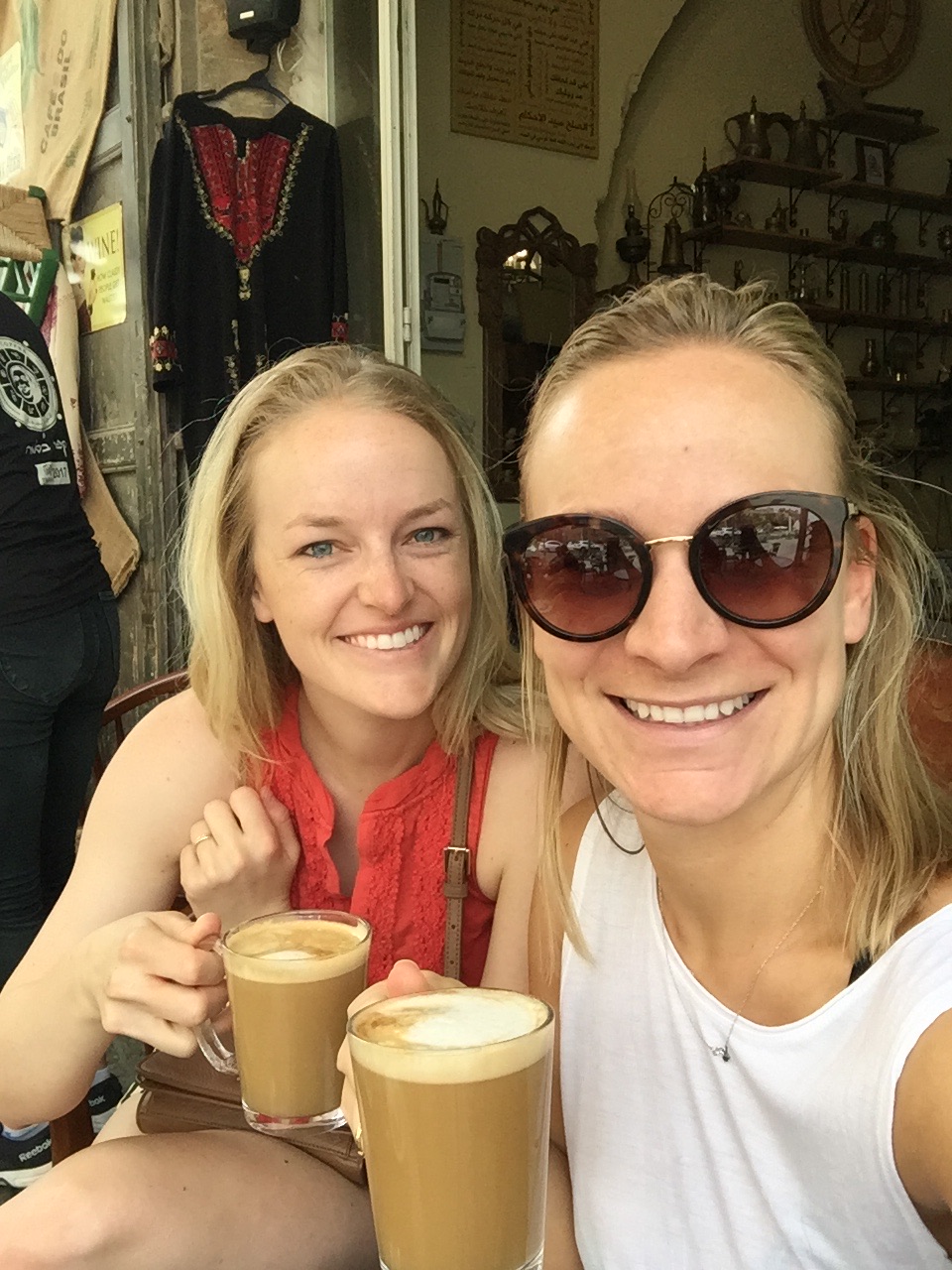 After breakfast, we walked the 10-15 minutes down to the beach. Wow, Tel Aviv has amazing beaches!

We walked around exploring the old part of Tel Aviv!

After a few hours, we ventured to the Neve Tzedek neighborhood in the heart of Tel Aviv. Newe Tzedek or Neve Tsedek,  is a trendy district and has become increasingly cool in recent years.  It reminded me of California in many ways. 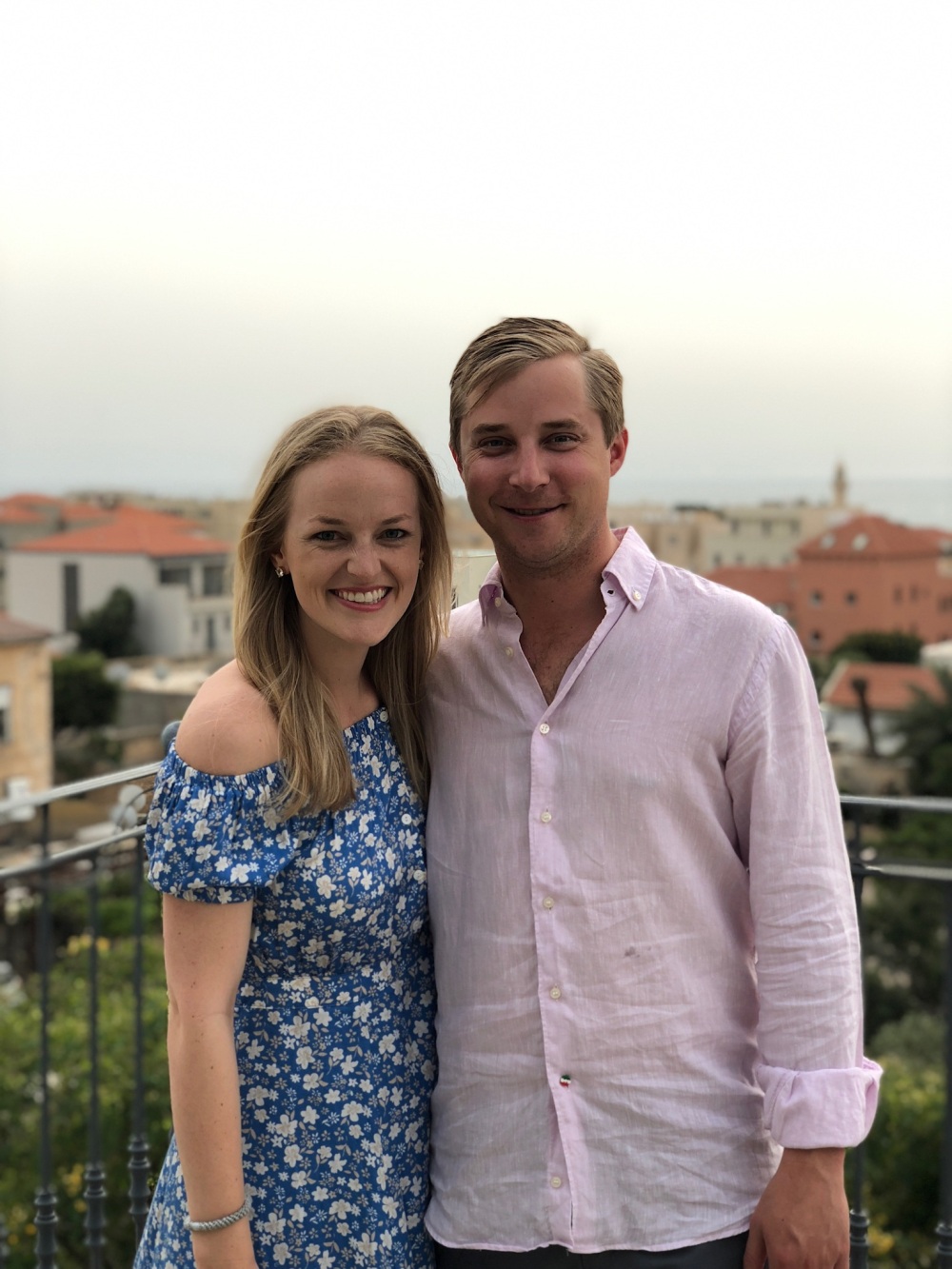 Pictures before dinner at our airbnb!

That evening, we went to an wonderful restaurant in the business district area called Claro. From the huge rack of lamb to the grilled octopus, the food tasted heavenly and the meal was probably my favorite of the whole trip!

On Friday morning, we hopped on a food tour of Tel Aviv, specifically through the popular Carmel market and the streets surrounding the market. I loved being able to taste and see where the locals go. Our tour guide was ironically from Sherman Oaks, CA originally (such a small world!) and came to Tel Aviv for birthright and to serve in the military.

Even thinking about this tour makes my mouth water. 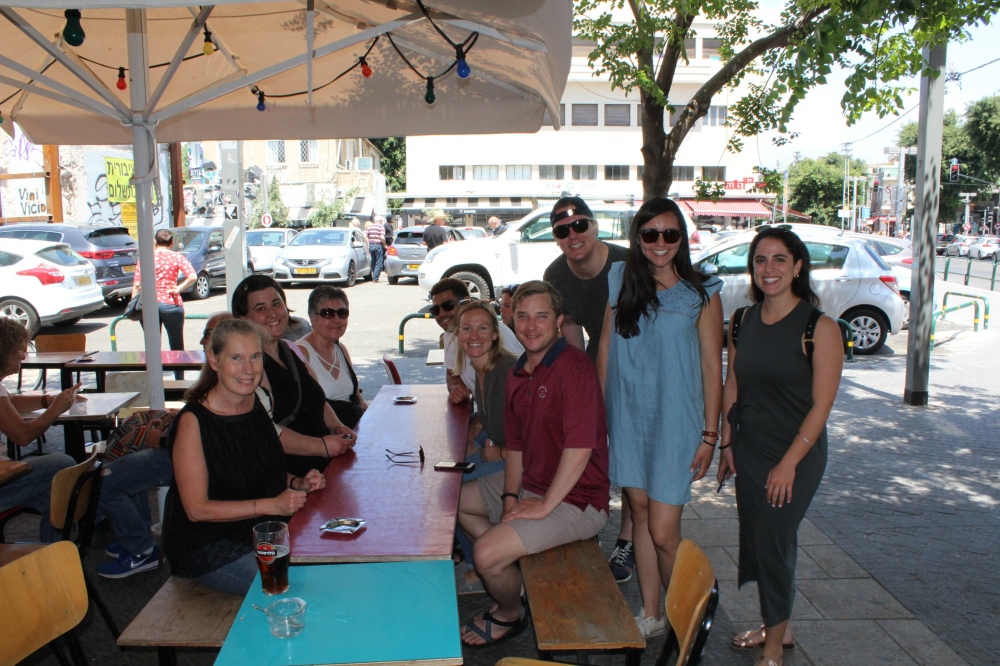 After we walked around Tel Aviv a bit more, we made the short drive over to Jerusalem. our group hung out the rest of the night — and stayed relatively close to our hotel.

The next morning we met our tour guide, Jeremy, bright and early for a full day walking tour through Jerusalem’s old town.

Originally from the U.K., Jeremy is Jewish and has lived in Jerusalem with his family for the past 15 years. He is truly an expert in all things culture, religion, and history.

Jeremy started the tour by asking us, “what are your expectations for the next two days of touring?” and, “what is your background with religion?”

I loved the way he addressed our expectations from the start. Everyone in our group brought a unique perspective and faith background to the trip and we all had a heightened awareness of each others’ differences.

We agreed we all wanted to dive into the culture of Jerusalem and everything the city had to offer. We were open to his stories, hearing about the background of the city from different angles, and to what we would ultimately learn about ourselves through the tour.

I wish I recorded Jeremy because he shared countless interesting facts and stories. We realized early on in the tour we could spend weeks in Jerusalem and there would be much more to learn and see. Jeremy did a wonderful job of laying the groundwork for us in every way — and all the while cracking jokes and making it fun and interesting.

We learned Jerusalem’s old city is divided in many ways politically, but there are four different quarters that divide the city culturally, religiously and even historically: Armenian, Jewish, Christian, and Muslim.

We walked through little back alleys and stopped at an overlook with a view of the Temple Mount, Dome of the Rock, and the Western Wall. In the Jewish faith, the temple mount is the last remaining piece of the original template platform, which is why it is considered holy. One fun fact: the temple mount is the size of 30 American football fields!

Jeremy said we should wake up early the next day in order to beat the crowds and go up to the temple mount and explore. (More to come on this!)

Next, we followed Jeremy to an area directly next to the western wall, a 1st temple period wall, that many visitors do not know about; it contains ruins of small churches from the crusader time period. 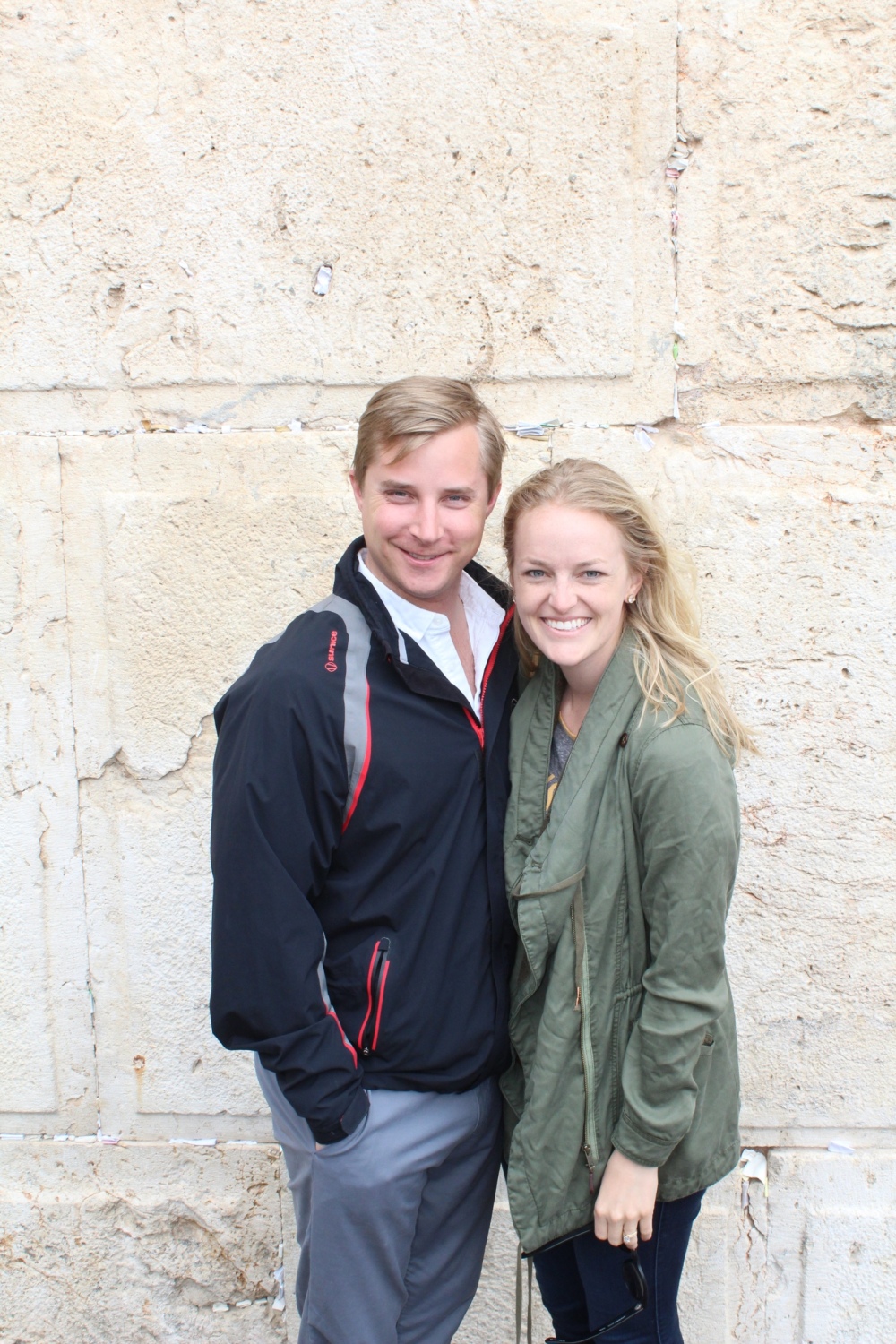 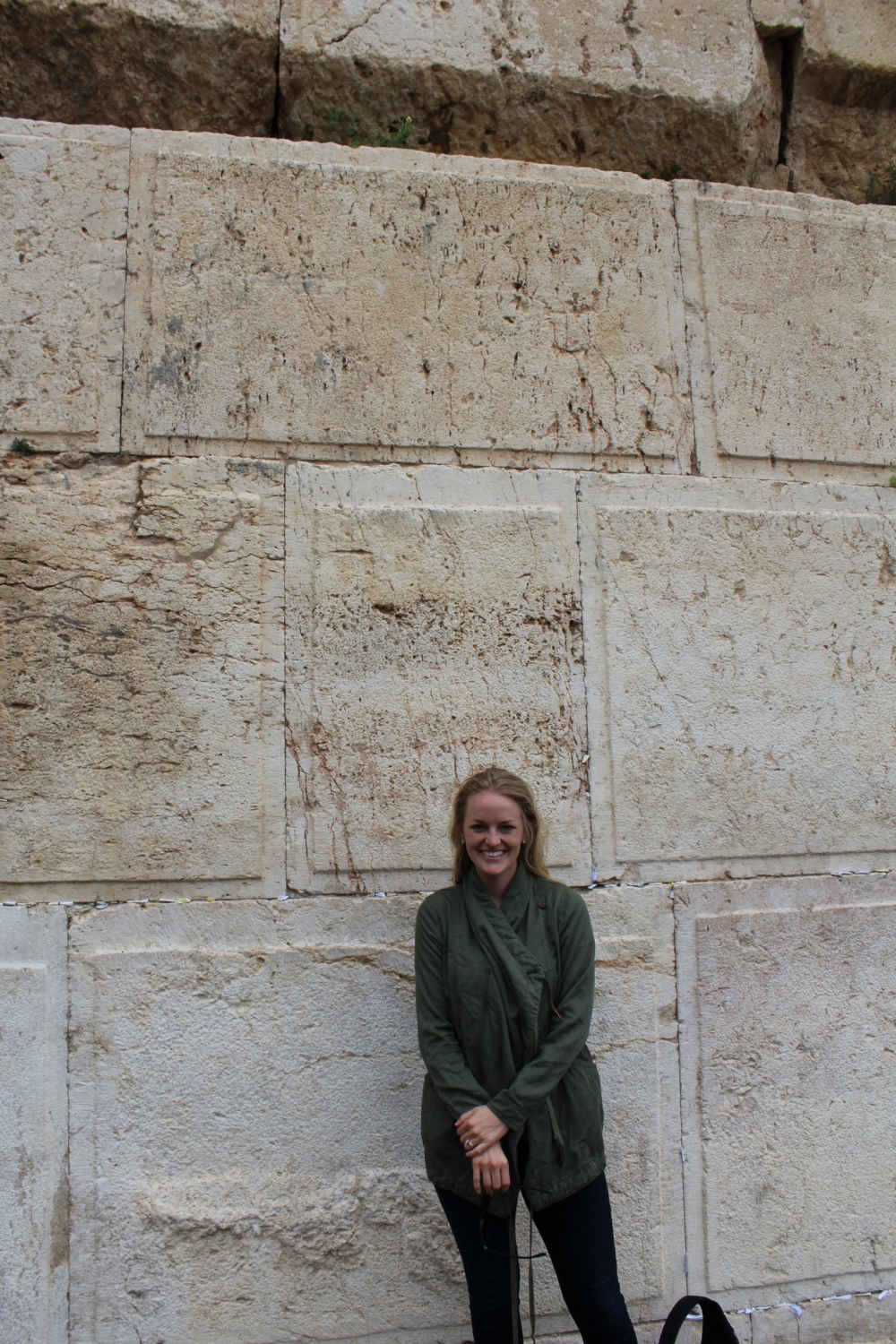 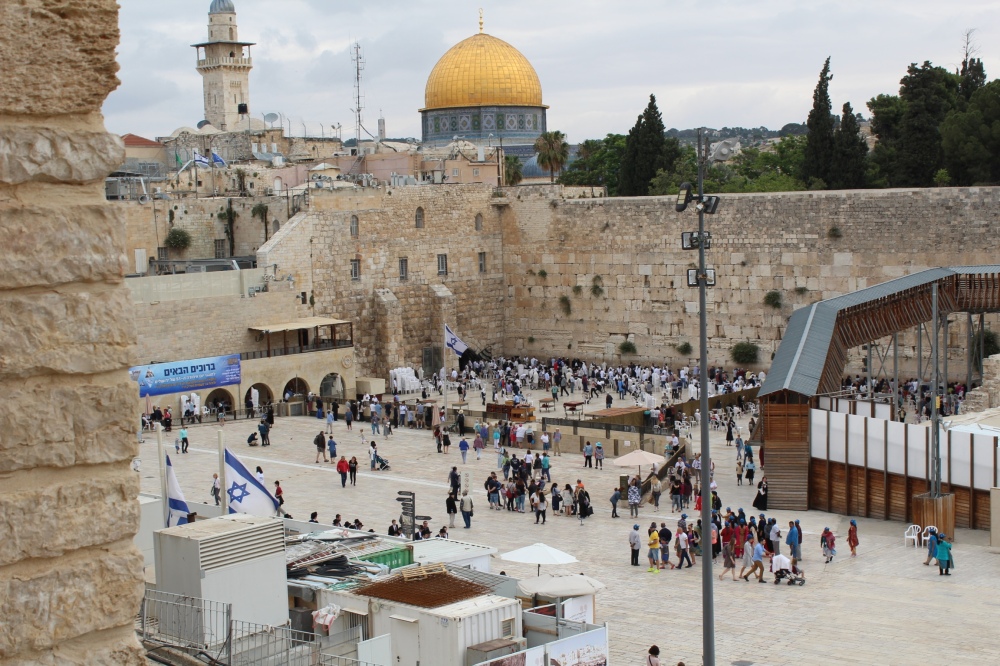 After we spent time around this area, we walked outside of the old city gates to the Mount of Olives. There we saw the Garden of Gethsemane at the church of the Agony, where Jesus prayed the night before he was crucified. It was a special and holy moment for me. 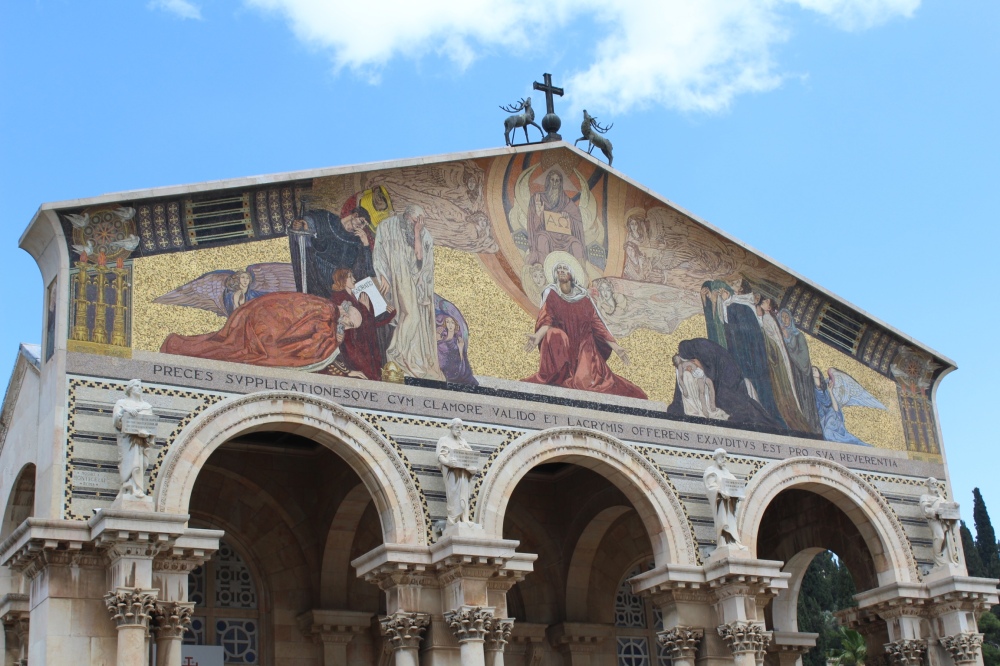 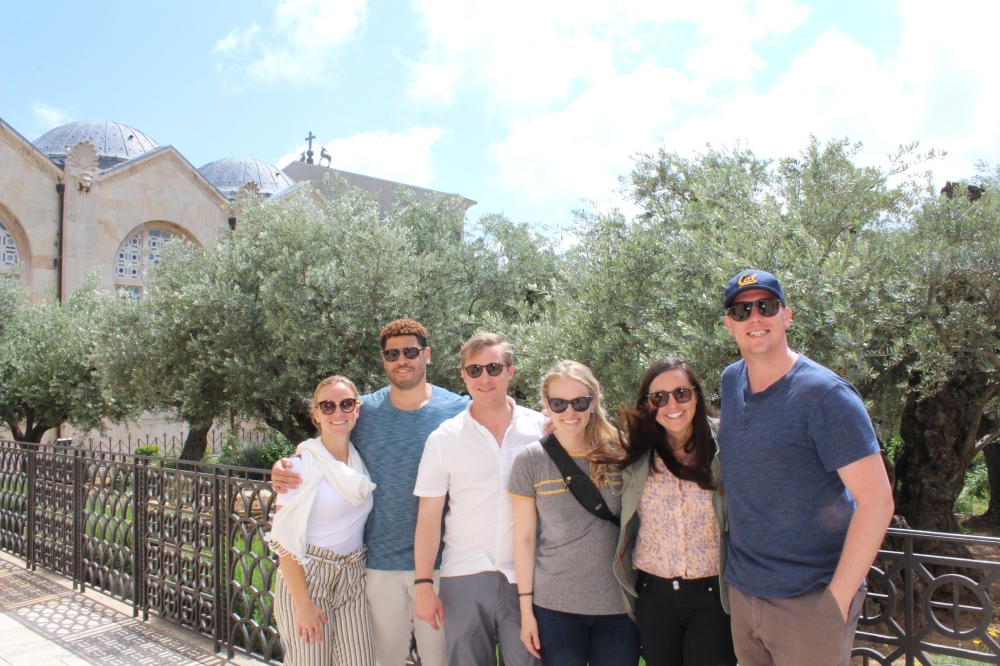 After seeing this beautiful garden and spending a little quiet time reflecting, we went on to the Damascus Gate and the Muslim Quarter and ate an amazing traditional lunch with hummus and falafel.The lunch conversation surprised me because Jeremy opened up about the US embassy move to Jerusalem and the political and social implications the move had for the city and his perspective. He actually praised Trump for the move because it represented much more to the Jewish people of the city and spoke candidly about the impact it would have in his life.

After lunch, we walked along the very touristy Via Dolorosa — where Jesus walked to the cross and saw the pools of Bethesda and St Anne’s Church. 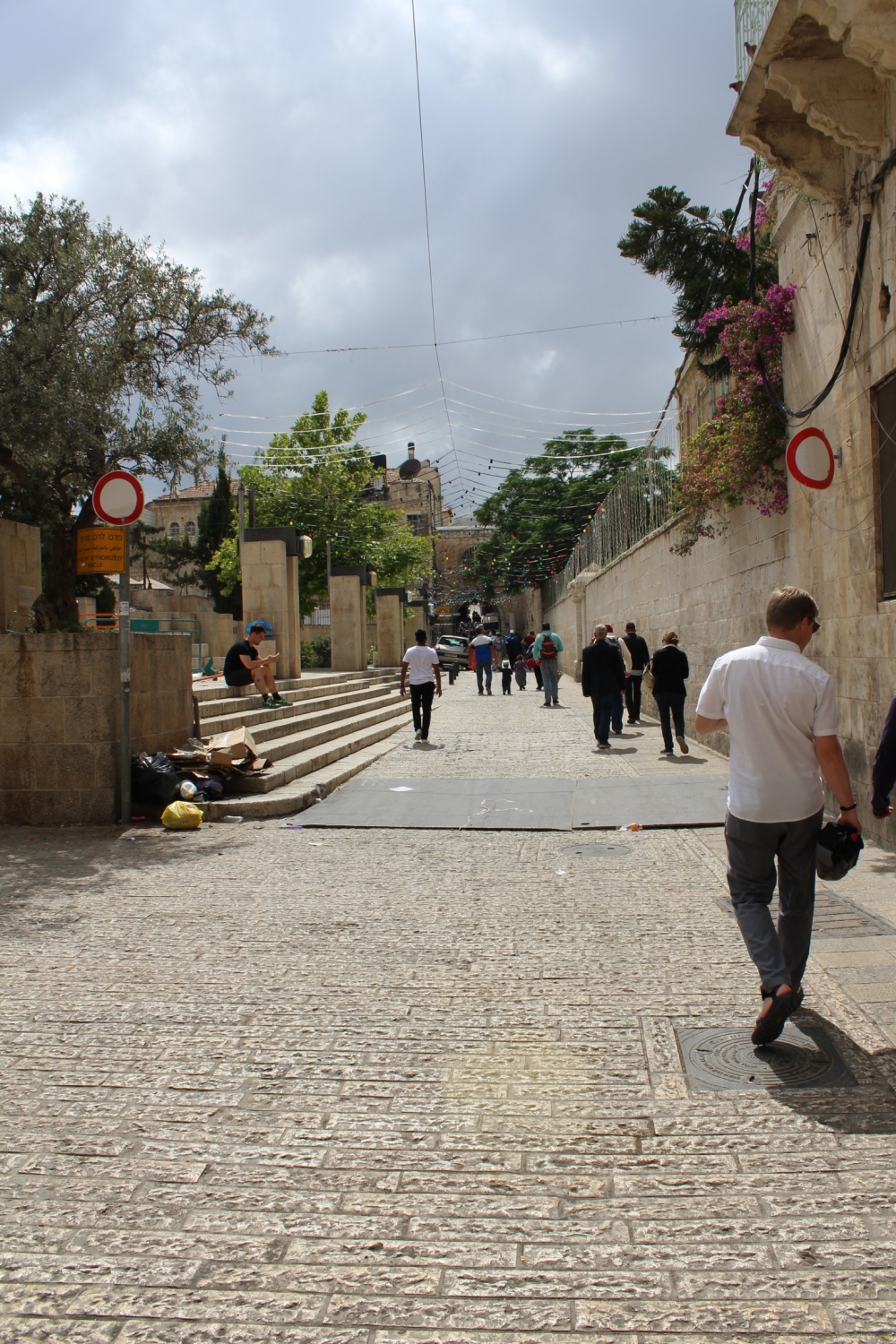 The next morning, we woke up early to see the Temple Mount before the crowds formed. And, let me say, it is absolutely sensational and a complete must – see! Our friends, Melissa and Bill, went to the Dead sea for the day because they wanted to see it before they went back to Amsterdam later in the evening. It was the 4 of us: Jacqueline, Alex, Bryan and me.

Due to the Holiday in Jerusalem, Jewish people were permitted to go up to the Muslim only area that day. I am thankful we woke up early to beat the crowds!

The dome of the rock is sensational. 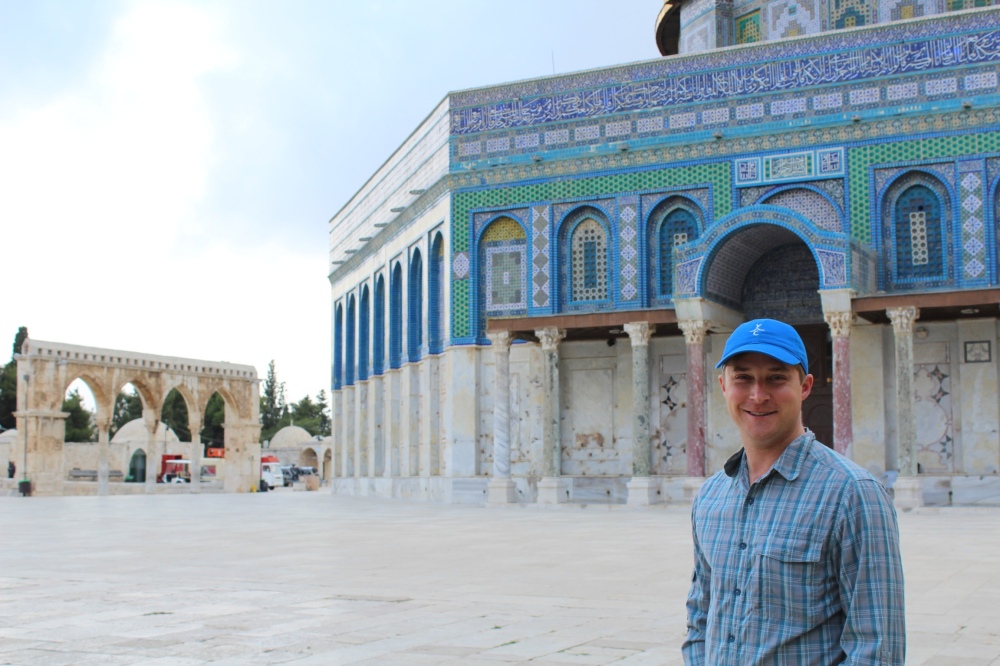 We did not need to cover our heads like we thought we needed to! So, Jacqueline and I took off our head scarves after we took this photo.

After spending time at the Temple Mount, we met up with Jeremy again and he took us to the Holy Sepulchre Church, the famous church which many people believe is on top of where Jesus was buried. 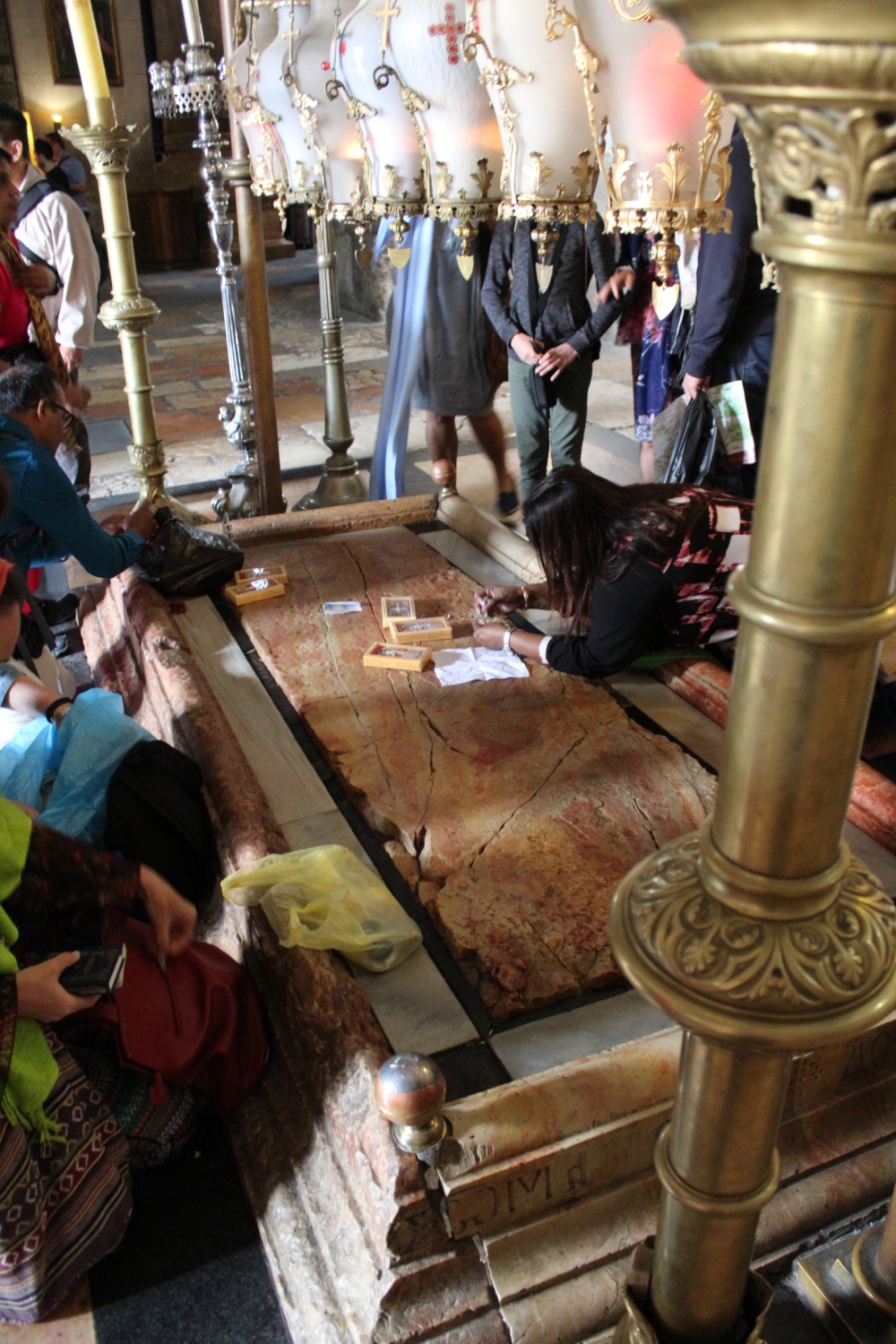 A second day with Jeremy allowed us to explore more areas off the beaten path. We walked around different parts of the city which were unique, like the Mea She’arim, one of the oldest Jewish neighborhoods. Incredibly eye opening and interesting, the Asidic Jewish population lives there independently. They do not take any aid from the government and do not serve in the military. 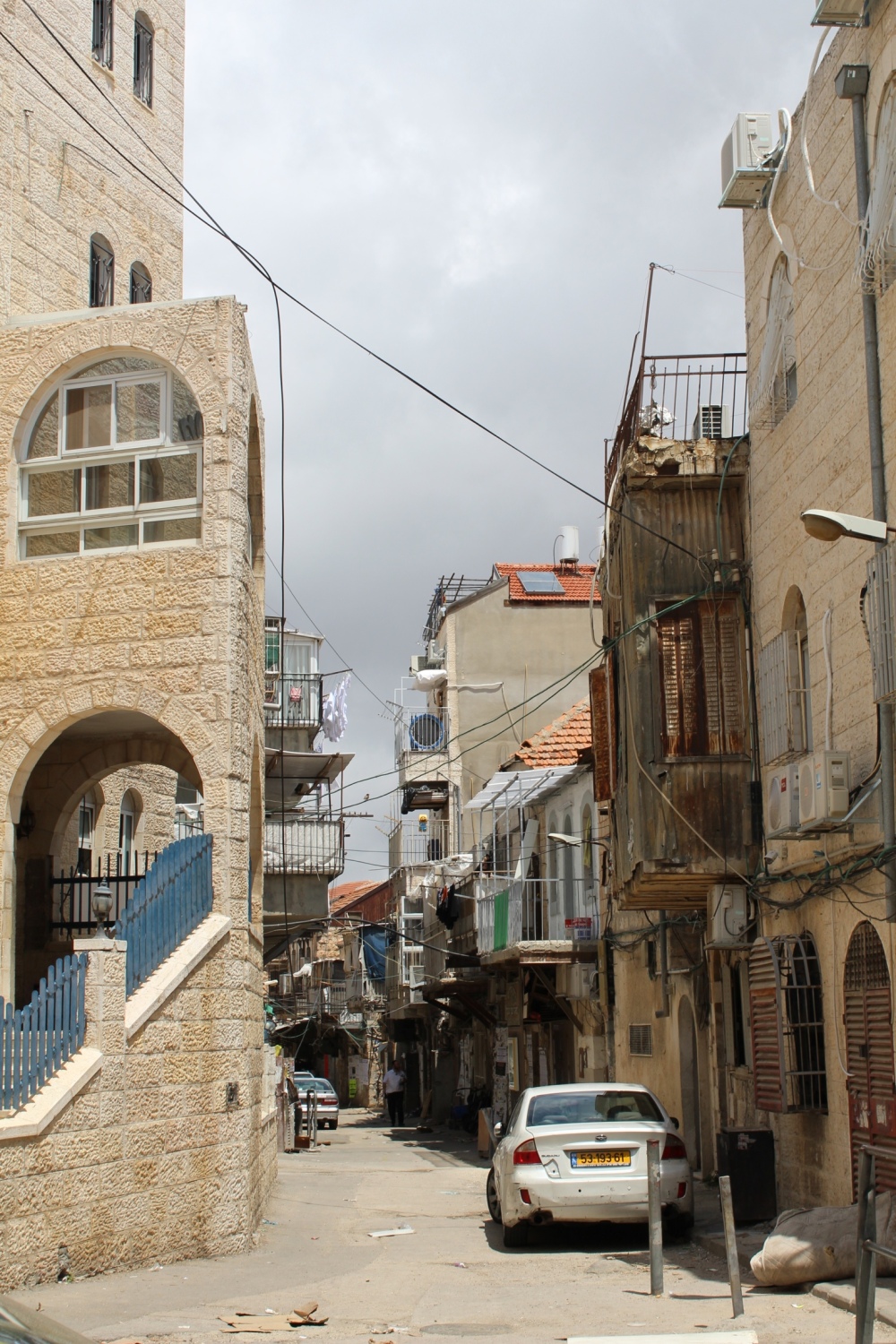 We went to a delicious lunch then a mini food tour of the Mahane Yehuda Market.

After our two days with Jeremy, he became our go-to resource and friend. Please let me know if you go to Jerusalem because I highly recommend him. He tailored the tour for us and really knows his stuff!

Our last evening in Jerusalem was interesting because it was the Jerusalem day Holiday, so none of the trams were running into the center. The rest of the group decided to stay near the hotel for dinner, but Bryan and I wanted to walk back near the market for dinner.

We stumbled upon a fabulous place called Yudale. We were drawn to the club type music and crowds of locals standing outside. Bryan and I snagged two seats at the bar, and loved our meal.

The next morning Jacqueline, Alex, Bryan and I continued our journey over to Jordan to the Dead Sea.

Jacqueline planned the logistics with a company to take care of the visas needed to cross the border and the transportation. The process was not easy and a bit complicated, but we finally got to our hotel for a little R&R.

But first, it was time to lather in the Dead Sea minerals and float in the dead sea. 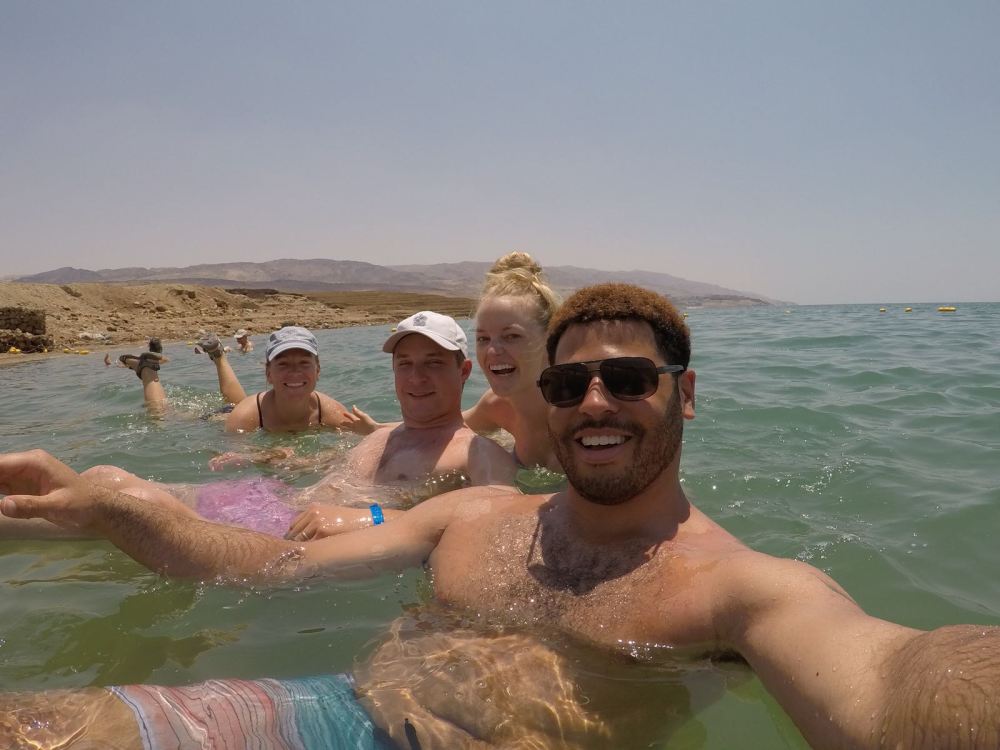 Floating in the Dead Sea was pure magic. I did not think I would really float — for some reason — but, you absolutely float. The high salt content is no joke! 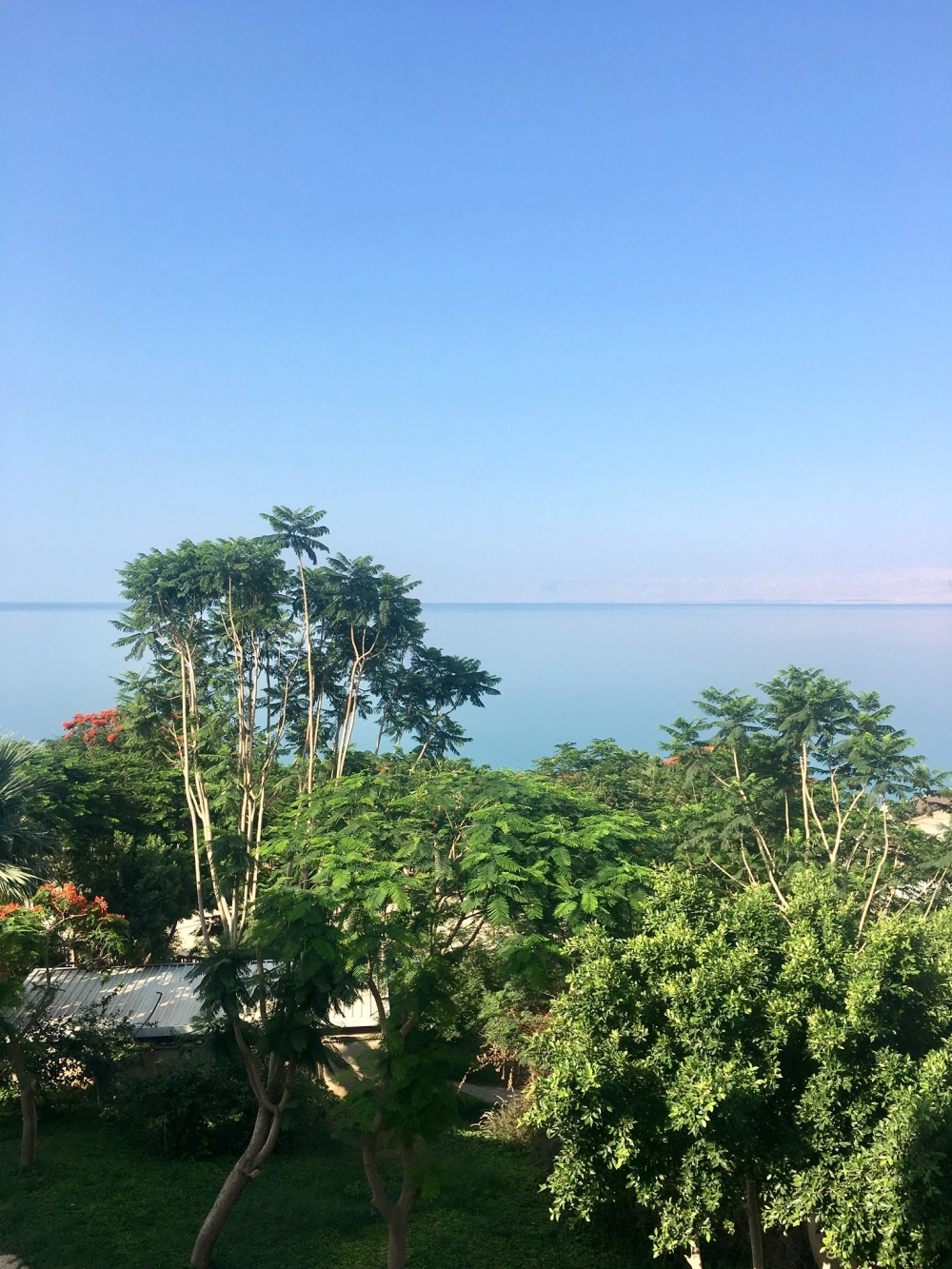 Bryan and I left on Tuesday morning back to Amsterdam, and I did not want to leave.

By the way, If you are still reading this, thank you. 🙂

Let’s chat more about this trip over a cup of coffee when I see you next. I cannot quite articulate all my thoughts about the trip in a meaningful and concise way!

By the way, this week is our last week in Amsterdam before a bunch of travel and then a move back to Atlanta. It may take a while for my next post, but I am committed to keeping this little travel blog alive.